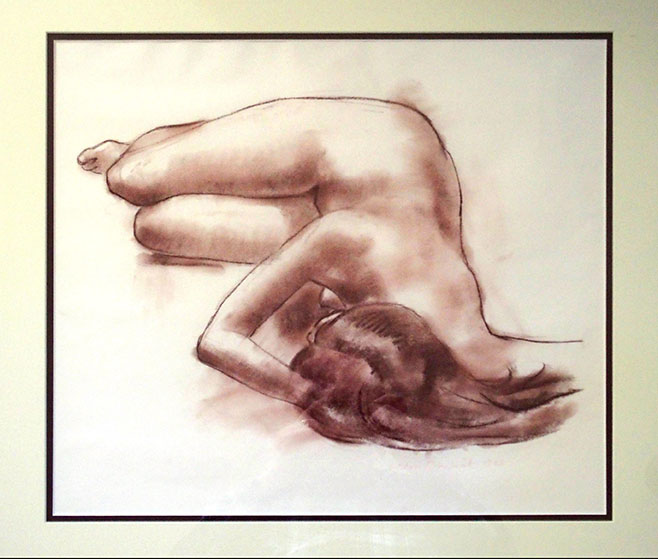 To depict beautifully a beautiful human body has been the aim of ages of artists, and Wilson Binebrink was an heir to that ancient tradition. This drawing was made to be a polished work in itself, not a sketch intended to capture some visual event nor a study intended as an intermediate stage in the production of a painting, say, or a sculpture. It is, in some ways, a simple treatment: a single figure against an almost empty ground, a surface barely suggested by the figure’s few cast shadows.

Binebrink has chosen to describe his subject with both line and tone. In a few places (the right hip and thigh, and the right shoulder and arm) we can see the light tentative strokes of the preliminary drawing; but for the most part those lines have been absorbed into the lines and tones of the finished piece. Some of the lines, especially the calligraphic swirls that describe the right thigh, are beautiful in themselves. At the same time, there is a satisfying rightness to the way that the line separating the thighs describes the weight of one thigh pressing upon the other. And there are several points—the right hip and thigh, and the right arm—where the line thickens to suggest the dark side of the limb, and fades, thinning, as the form turns toward the light.

Binebrink applied tone to the drawing with a sure hand: it appears that the tone on the right arm and the thighs was made with single strokes of a crayon laid on its side for maximum coverage. Like the lines, the darker tone was applied with a burnt umber crayon; but the lighter tone was made with sanguine. The important highlights appear to have been determined from the outset (ie, not erased from an area of light tone). The description of light and dark on the model’s back is impressive, with subtle lighting and shading to describe the shoulder blades and the dark of the spine. Note, too, the attention to reflected light, especially on the lower back and the thighs. The complicated transitions around the neck, collarbone, and shoulder are described very capably within a very few square inches. The description of the hair is surprisingly cursory, as if Binebrink were trying to direct the viewer’s eye past the head to the torso. It is in the strokes of the hair that we can most clearly see the rate at which the artist drew.

One gratifying quality of this drawing, and one which most viewers fail to appreciate, is the composition. Separating our mind from the subject, we see that the picture is a large zigzag formed by the legs, torso, and left arm—all right angles with horizontal and vertical orientation, relieved by the diagonally-turned right angles of the right arm. There are also interesting triads of parallel lines: the lines of the thighs, the lines that describe the upper right arm and the front of the hair mass, and the single line describing the right arm, together with the upper and lower edges of the hair in front of that arm. Such geometric considerations were perhaps not in Binebrink’s mind as he drew, but they certainly contribute to the harmony of the drawing, as does the felicitous placement of the figure in relation to the picture space. Binebrink himself was surely aware of the role of horizontals in conveying the repose of the figure.

Wilson Binebrink was born just three years after the Armory Show of 1913. He came of age as an artist at a time that American art was struggling to absorb the lessons that European art forced upon a strait-laced America that had difficulty distinguishing between a nude and a pinup. His understanding of those lessons is apparent in his work, even as he chose a more traditional, realist approach to making art.